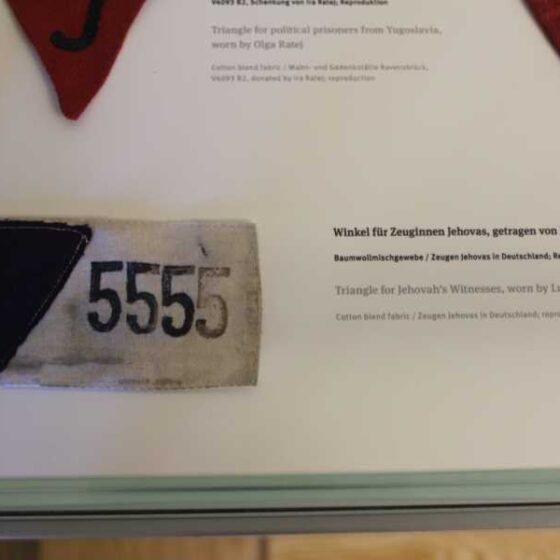 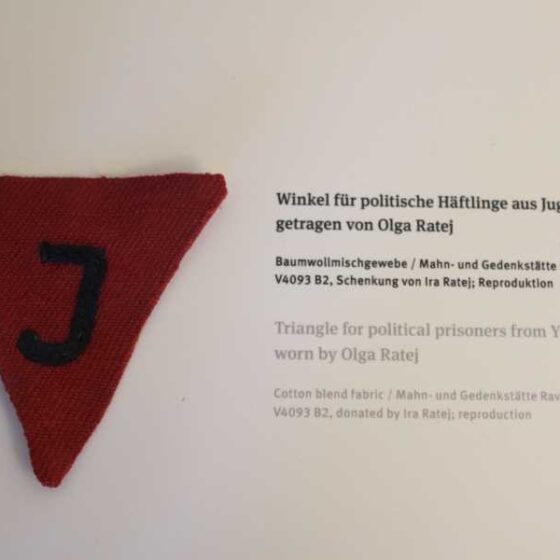 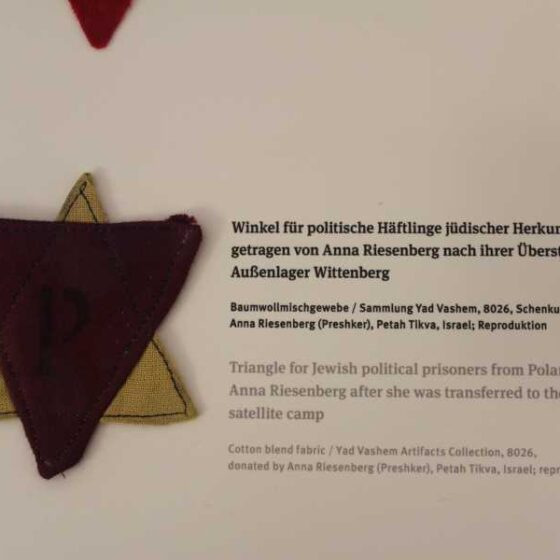 The first prisoners in the KZ Ravensbruck were German and Austrian women, more than a third of which were Jehovah’s Witnesses. The second-largest group around 1940 were women persecuted for being „antisocial“.

During the war, and due to the National Socialist genocide against Jews, the Sinti and Roma, the mix of prisoners changed considerably: the SS hauled off more and more women from occupied countries to the KZ Ravensbruck. The prisoners marked as Jewish at one time made up more than 15% of all inmates, but the largest group by far were political prisoners. Many had been active in the resistance or refused to do forced labour.

In the KZ Ravensbruck prisoners wore a cloth triangle on their clothes, and the colour and a letter on these triangles denoted the prisoner category and nationality. This had a massive influence on your chances of survival in the camp.

Women from socially marginalised groups which didn’t fit into Nazi ideas of a pure-race national community, were taken into „preventive custody“. In the camp they had to wear the green triangle for „occupational criminal“ or the black one for „asocial”. Sinti and Roma women had to wear the black triangle as well.

An additional yellow triangle marked Jewish prisoners, and they were exposed to harassment and violence by the camp SS guards to a much higher degree than the other prisoners.

More than 70,000 women in the KZ Ravensbruck wore the red triangle of the political prisoner. About every tenth was from the German Reich. Initially, active opponents of the regime were incarcerated – especially communists and socialists that had organised in resistance movements.

During the war, criticising the NS regime or even merely listening to a foreign radio station could lead to imprisonment in a KZ. In the spring of 1942, nearly every sixth woman was there because of alleged „intercourse with a foreign element“, mostly that meant that they had fallen in love with a forced laborer.

Foreign prisoners were mostly just given the red triangle. Many of them had actively resisted the German occupiers or had fought against being taken into forced labour.

At about 800 prisoners in May 1939, female Jehovah’s witnesses had been the largest group in the KZ Ravensbruck. They were called „bible researchers“ and had to wear the purple triangle in the camp.

The Nazis had outlawed the „International Bible Researchers Association“ as early as 1933. Due to religious reasons, the Jehovah’s Witnesses rejected the personal cult around Adolf Hitler and military service, they refused to give the Hitler salute of join any NS organizations. Most of them were arrested on charges of illegal work or public gathering.

In Ravensbruck they refused to do labour that supported the Nazi war effort on several occasions. More than 400 bible researchers were severely punished in December 1939 after they had unanimously refused to make bullet pouches for soldiers of the Wehrmacht.

The Jehovah’s Witnesses could be released from imprisonment if they signed a paper that renounced their religious beliefs. Only a few made use of this.

More than 5,500 women at the KZ Ravensbruck had to wear the black triangle, denoting them as “asocial”. At times, in the early years of the camp they formed the largest group in the camp.

The National Socialists denounced divergent behavior of minorities such as that of the homeless or of alcoholics as “asocial” and “socially deviant” (“asozial”, “gemeinschaftsfremd”TN). The Criminal Investigation Police (“Kriminalpolizei”) was able to commit “asocial elements” to concentration camps. Women were often accused of abnormal sexual behavior, with the police condemning their lives as “licentious” or their conduct as “lewd”.

Many of the women imprisoned in the KZ Ravensbruck had a criminal record as prostitutes, having failed to observe police or health authority requirements. Others had been sentenced for minor property theft or fraud cases, or they had breached the obligation to work law or were transferred to the KZ from care facilities. Sinti and Roma were also marked as asocial.

More than 1,100 women in the KZ bore the green triangle marking them as “occupational criminals”. The crime police had the power to put people who had been incarcerated more than once before into preventive custody, without any court ruling or order. Their imprisonment in the KZ was seen as “preventive crime-fighting measures” to protect the “national socialist ethnic community”.

From 1943, the judiciary also transferred women to the KZ Ravensbruck for whom the courts had ordered preventive custody. The approximately 200 prisoners also wore a green triangle, but upside down with the pointed end facing up.

Women who were held in preventive custody or as occupational criminals, were often repeat offenders of minor misdemeanors such as petty theft, fraud or illegal abortion, and many came from poor backgrounds. Not much is known about their situation in the KZ Ravensbruck.

There were at least 2,800 women and children imprisoned at the KZ Ravensbruck who were persecuted as “gypsies”. The first large transport consisting of 440 Roma from the Austrian region of Burgenland arrived in June 1939. The youngest in that group were 14 years of age.

In the course of the Nuremberg Laws, the Nazi leadership had deemed Sinti and Roma as “fremdrassig”, meaning “of alien race”, and was planning the deportation of all “gypsies”. From October 1939, they were not allowed to leave their places of residence, and offenders were put straight into a KZ. Romantic affairs between “gypsies” and “Aryans” were also punishable by KZ imprisonment.

From 1943, more than 20,000 Sinti and Roma from all across Europe were taken to Ausschwitz. Most died there from hunger, disease or in the gas chambers. When the “gypsy camp Ausschwitz” was cleared in 1944, more than 1,000 women and girls were transported to the KZ Ravensbruck. Here, in experiments on humans, the SS sterilized more than 100 Sinti and Roma against their will in early 1944.

Until 1942 there were about 1,400 women imprisoned at Ravensbruck who, by the Nazi race ideology, were categorized as Jewish. In the spring of 1942, the SS killed around 800 of them with poison gas in the convalescent and nursing home of Bernburg, in a murderous act code-named “14f13”. Another 522 women were hauled to the extermination camp Auschwitz in October 1942, after which the KZ at Ravensbruck was deemed “free of Jews”.

There were only a few Jewish women newly incarcerated there until the end of 1944. It was only after the clearing of the Auschwitz KZ that mass transports of Jewish women and girls began to arrive at Ravensbruck from late 1944. Thousands of Jewish women were hauled from Auschwitz or Hungary and Slovakia to the KZ at Ravensbruck. A total of nearly 20,000 were deported here or one of its satellite camps and about half of them were from Hungary.

Some prominent people from Germany or abroad were given the status of “special” or “honorable” prisoners after their incarceration. There were held in stately homes, manor houses or in separated areas of the KZ.

There were some special prisoners kept in solitary cells at the KZ Ravensbruck from 1942. In 1944, their numbers increased considerably: a special commission of the Gestapo used the cell complex as a remand prison. It imprisoned men and women here who had had a connection to the resistance cell around Hanna Solf, and later also people who were thought to have had a connection to the attempted coup of 20 July 1944. They also imprisoned people there who were arrested under “Sippenhaft”, meaning they were imprisoned simply for being related to a dissident.

The special prisoners received neither a triangle nor prisoner’s number, and many had better conditions during their imprisonment. They received SS rations and some were allowed visitors. Around 100 special prisoners of the KZ Ravensbruck are known by name.