Irene Fainman-Krausz was born in Schiedam in the Netherlands on 1st October 1935. She was the daughter of an English mother (Rachel) and a Hungarian father (Bela), and grew up happily with her elder brother Don.

This happy childhood ended for Irene on 16th September 1942, when she was seven years of age and her mother told her that she couldn’t go to school on that day. Irene asked why but received no answer. Shortly after Dutch National Socialists came and unequivocally told them that they had ten minutes to pack one bag per person. Irene’s mother had been prepared for this visit the bags were already packed. The whole family was then deported to the transit camp Westerbork, close to the German border. 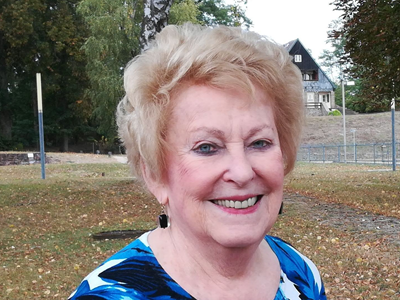 In Westerbork people were interned who were a thorn in the side of National Socialists. Once a week there was a train to Auschwitz. The fear of being on the list of people who had to get on that train was a constant companion in the everyday life in the camp. This life was initially not so bad for Irene: she had her parents and her brother around, was able to play with other children and learned to sing Hebrew, German and Dutch songs. Her parents had to work. There were no punishments in the camp.

The family spent two years in Westerbork until, in February 1944, her father was separated from his family and deported to Buchenwald. Only two days later Rachel, Irene and Don were transported to Ravensbruck by train in the night. From here, Don was sent to Sachsenhausen.

In a large hall the women had to take off all their clothing. Jewelry was confiscated too. Rachel was made to give up her wedding ring which was the last memento of her husband. This was the first time Irene had seen her mother cry.

The hair of many of the women was shaved off for fear of lice, but Irene and her mother had washed and combed their hair, and it was therefore not cut off. The women were given the striped prisoners garb, a jacket and trousers, underpants and wooden clogs with no socks. Irene was allowed to keep her entire clothing as there were no children’s prison uniforms.

When she set foot into the prisoner’s barracks a short time later, she abruptly began to scream and felt unable to stop. She had never seen anything so terrible, nor smelled anything like it. Women shaved bald, unbelievably thin, with hollow cheeks and protruding, vacant eyes. Everywhere there was the smell of human bodies, unwashed for months, emaciated, sick with diarrhea, which in the worst cases dripped down from the three-story bunk beds through the straw mattresses to the people below. The women stared at her and were desperate to touch her her hair, her body. Irene felt they were threatening and filthy and she couldn’t stop screaming.

In the mornings they often had to stand to attention for hours in the cold. Her mother tried to cover Irene’s eyes and ears to shelter her from the images and screams of the tortured. The mother had to work in the daytime – she was laying down heavy railroad ties, a back-breaking labor. Sometime later someone found out that she was a teacher, and from then on she had to teach children in the camp.

One day her mother had to do the so-called Siemens Test, in which visual acuity and manual dexterity were checked. Rachel was forced into labor for Siemens after passing the test. She took her daughter with her. At first, they were made to walk the way from the main camp to the Siemens camp in the middle of other forced laborers. Rachel taught her daughter how to walk in the group without attracting unwanted attention. Rachel manufactured microphones and telephone receivers. Later they were put into the Siemens camp barracks, where every woman had her own bed. Irene hid out here during the day, but was also able to play a little, inconspicuously, with another child. The Siemens camp was cleaner than the main camp, they were treated better and received better food. Her mother said nothing of her work.

Irene and her mother were liberated on 28th April 1945. The white buses of the Swedish Red Cross were to take a large number of prisoners to Sweden, and Irene and her mother were lucky to get on the list for this. When Irene walked through the gates of Ravensbruck to freedom, she disbelievingly asked her mother if this could be true. When her mother confirmed that this was so, she felt safe again for the first time in a very long time.