Irena Forslind was born in Poland in 1927. She grew up with her mother and her father, a partisan in the resistance.

When school started again after the summer of 1939, the teacher told the children that war had broken out in Poland and sent them back home. She had already spotted men being mobilized in order to defend the country on her way home, and her father had to leave town and join the war.

Not much later, her town suffered bombing raids and Irena, her mother and grandparents had to flee to the countryside, where they found shelter on a farm along with a great number of other people. Irena was very afraid and had to hold out on the farm for a very long time. When it was finally over, German soldiers sent them back home again. 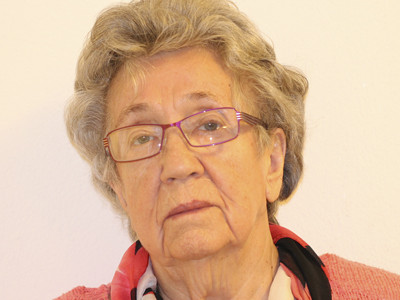 Their house was almost completely destroyed and there was neither electricity nor water. Irena and her mother lived in fear every day, not knowing how long they would have to live in these conditions. At the time, abuse and rape by the soldiers were daily occurrences and Irena’s mother was not spared. It was only much later that Irena found out that a child had resulted from this.

One night there was a soft knock at their door. It was Irena’s father, returning injured from the war. Irena was overjoyed and convinced him to stay the night. She didn’t know that they had been betrayed to the SS, who came to the house that night. Just as they were going to bed, the SS knocked hard on their door. At that instant, they knew that this was their last moment together as a family. The father hugged Irena and her mother and opened the door. He was beaten and tossed into a military vehicle. Her mother and Irena were separated too and thrown into different vehicles.

Irena spent nine months in a prison in Lodz where she had to work under the cruelest of conditions, hardly received any food and was physically abused. They also tried to interrogate Irena, but as she didn’t understand anything nor could she say much, she was beaten until her back was bloody.

In 1940, at the age of 12, she was put on a freight train and transported to Ravensbrueck. It was terribly crowded and there was no food or drink. Many women died on the torturous transport, their bodies heedlessly thrown off the train.

On arrival in Ravensbrueck, the women first had to undress naked in front of the SS-men, which Irena found horribly demeaning. Her hair was shorn off, any jewelry was confiscated and they were given prison clothing. Irena was also given a red triangle, identifying her as a political prisoner. Then she was brought to her barrack and given a mug and a bowl, her only possessions from now on.

The women were given different kinds of work to do. Irena was led to a factory building far from the immediate vicinity of the camp. There it was her task to make new ammunition, a work at which she was put under great pressure and constantly controlled by guards who punished her if she didn’t achieve the demanded workload. Irena was hardly given any food or drink before and during the work, so she was suffering from hunger all the time.

The work was in 7-day shifts, one week of day-work followed by a week of night shifts. There were no breaks.

Back in the camp, the inmates lived in constant fear of the arbitrary violence dealt out by the female wardens. Irena was surrounded by disease and death in an inhumane atmosphere, one that has lingered with her until today and brings her painful memories.

In 1943, Irena was deported from Ravensbrueck to a new ammunitions factory in Wuppertal. Here too she had to work in the worst of conditions. For Irena, every day was a new fight for survival.

One day, when the ammunition factory was being bombarded, Irena, together with another inmate, managed to flee. They were given shelter by a woman who also gave them food and clothes. From there they continued their flight on towards Lodz, first catching a train to Poznań and then on to Lodz. On their way they had to hide from controllers and police patrols, they only spoke German for fear of being discovered. On arrival, they parted ways and Irena continued onward to her family home. But here she found a new family living there, who verbally abused her and held her down until the alerted police arrived. The police took her back to the prison in Lodz, and from there Irena was deported back to Ravensbrueck in 1944.

Harsher conditions than even before were inflicted on her now, and the daily abuse and lack of food drove her more and more towards despair. The treatment reached an awful pinnacle when she refused to follow the order of a warden and insulted her. With a wooden stick, she was beaten to unconsciousness. Her face crushed, she was thrown into a bunker.

When she finally woke again days later, it first took her a while to realize what had been done to her. She was in great pain but forced to work again after one week. As her injuries made it difficult to eat anything, she became weaker day by day. Her will to live was disappearing more and more, she wished for nothing but an end to her torture. Her fellow inmates tried to give her some courage, but she had almost given up. At this point, Irena only weighed about 20 kilos. Desperate, she quietly wished to be taken to the gas chamber.

However, this was not the end for Irena. One day it was the Swedish Red Cross that opened the gates and freed Irena from the camp. With much difficulty she travelled through Germany and Denmark to Sweden. Irena has hardly any memories of this time, as she was unconscious most of the way. At present, relatives and friends are trying to piece together exactly how she managed to get to Sweden, as there are still many unanswered questions about that time of her life. Irena has however found out that her mother was taken to Auschwitz and her father deported to Buchenwald. Her father died from the unimaginable tortures, and while her mother survived her time in the camps, her psyche could not process the experience, and for Irena she was never the same person again.

When Irena tells her story today, it was not the Swedish Red Cross that saved her, but her husband Jan, who helped her get to grips with the endured terror. To this day, talking about her past tears open old wounds for Irena. But still she has managed to find the strength to forgive the people who abused her so much for years. She states that it is only through the respectful treatment of one another, that we can find peace in this world.

For Irena and for Jan